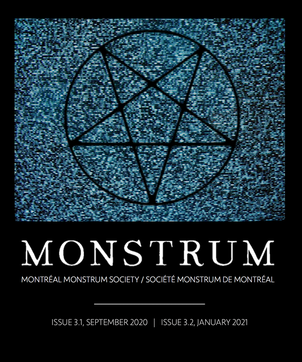 MONSTRUM 3 presents a special feature, a "virtual symposium" devoted to the series Supernatural, which ends its 15-year run in fall 2020. Edited by Stacey Abbott and Simon Brown, Supernatural — The End of the Road: A Reflection will be published in two parts. "Part One: THEN" appears below, with "Part Two: NOW" follows in early 2021. This rather uncommon splitting of the virtual symposium is due to production delays in the final seven episodes of Supernatural, the result of Covid-19 quarantines. With some of the essays in the feature requiring the final episodes to complete their analyses, we made the decision to make MONSTRUM 3.1 a cliffhanger.

​As Stacey Abbott and Simon Brown write in their Introduction to this virtual symposium, Supernatural has weathered the contingencies of shifts in show-runners and networks, and has negotiated multiple time slots and distribution modes, from syndication to streaming. ​All the while the series has remained remarkably, almost monolithically consistent in style, tone and theme in a rapidly changing television (horror) landscape. Yet Supernatural is no mere TV relic. In the seven essays included in "Part One: THEN," readers will find discussions of Supernatural's complicated broadcast history in the UK (Brown), and of its status as a "tentpole" series for the still-young network, The CW (Giannini). Also included are essays on the show's trenchant (and often prescient) apocalypticism in both narrative and theme (Abbott); on the consistent centring of Dean Winchester in its musical selections and orchestral themes (Halfyard); on its melancholy nostalgia for the 'weightless' naïveté of Scooby-Doo, Where Are You? (Giannini and Woofter); and on its dogged focus on fraught masculinity at the expense of all else (including enduring women characters) (Jowett). Rounding out this first part of the symposium is an insightful and poignant "exchange" between Will Dodson and Huxley Bailey reflecting on how eight years of appointment viewing of Supernatural has undergirded their relationship as stepfather and stepdaughter, and created a sense of "uncanny inclusion" in their blended family.

"Part Two: NOW," the follow-up to this virtual symposium, appears below in the form of Issue 3.1. This second part wraps up the MONSTRUM 3's special feature on Supernatural with essays that, as Abbott and Brown note in their Introduction, "reflect upon the finale and its impact, focusing on fandom, religion, the Gothic, and the philosophical underpinnings of the show."
ONLINE SUPERNATURAL DISCUSSION PANELS BY "CONTINUAL"
In November of 2021, the online conference series "Continual" spoke with the editors and contributors to this special issue in two panels, one covering the show's "Themes and Portents" and a second covering the show's "TV Industry Impact." Both panels are available for viewing below.
Announcing the SCMS Horror Studies SIG Graduate Student Essay Prize
MONSTRUM is pleased to collaborate with the Horror Studies Scholarly Interest Group (SIG), part of the Society for Cinema and Media Studies (SCMS), in the selection and publication of their annual prize-winning graduate student essay. Selected by a jury of SCMS-SIG scholars and the MONSTRUM editors, this inaugural essay by Rachael Ball tightens the theoretical gap between the practical and digital body horror special effects, and their ostensibly distinct embodiments and presence in relation to profilmic space and spectator.

Acknowledgments: The editor would like to thank Stacey Abbott and Simon Brown for proposing and editing the virtual symposium on Supernatural, to the contributors for their insights, and to our peer reviewers and editorial board for their commitment to horror studies. Cover image credits: TV screen static (stock footage/public domain) & pentagram (freesvg.org).

MONSTRUM is supported by an editorial board of respected scholars in horror and related fields. We thank our collaborators, instructors, contributors and peer reviewers for making MONSTRUM possible.

A peer-reviewed journal of studies in horror and related areas.
Issue 3.2, January 2021  | ISSN 2561-5629​
Feature Editors, Stacey Abbott & Simon Brown
Editors' Introduction to MONSTRUM 3.2
Thanks once again to Feature Editors Stacey Abbott and Simon Brown and to all the contributors for their hard work and insights on a series that never failed to do things its own way.