Ken Russell's Gothic: Tone, Mode and the Limits of Art-Horror

Click HERE, or the image below for the full  lecture. 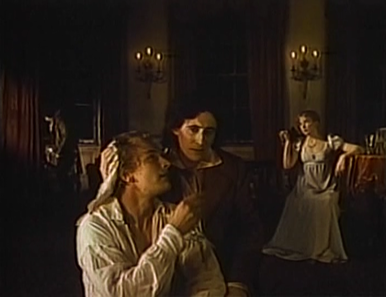 Gothic (1986, d. Ken Russell)
On April 4, 1997, an exhibit called "Gothic Transmutations of Horror in Late Twentieth Century Art opened at the Institute of Contemporary Art in Boston, Massachusetts. Purporting to cover the re-emergence of the "gothic" as style, mode, philosophy and artistic movement in the fin-de- siècle period, the exhibit was an eclectic and far-ranging amalgam of graphic art, painting, performance, sculpture, fashion, music and, of course, film. The catalogue for the show was revised into a beautifully produced cloth bound book.  Edited by the exhibit's curator, Christoph Grunenberg, and published by MIT Press (1997) the book became something of a topological work for U.S. scholars working on late 20th century instances of the Gothic, a helpful starting point for anyone planning to research or teach courses on late 20th century Gothic culture.  Grunenberg's book includes the screening list for the film and video series featured as part of the ICA's exhibit-and given the cultural imprimatur of both show and book, that list presents itself-- perhaps unintentionally-- as the "Masterpieces of Gothic Cinema." One film notably absent from the list is an art film that makes its own particular argument about the origins of Gothic horror, an argument that locates the Gothic pivotally at the intersection between high art and popular culture.  That film is Ken Russell's Gothic (1986). This talk was motivated by that exclusion and by the generally dismissive treatment of Ken Russell in the obituaries that followed his death. So it's a paper about bad objects (both films and directors) and about some undertheorized aspects of art horror.

"Ken Russell's Gothic: Tone, Mode and the Limits of Art- Horror" uses Russell's film Gothic to explore the undertheorized problem of tone in art-horror, and how tone intersects with mode (or subgenre--the gothic), mood, taste politics and auteurism (why is Ken Russell such a bad object?)  Since Gothic deals with the apocalyptic night when Mary Shelley wrote Frankenstein, there will also be some references to film versions of Shelley's novel and the book itself. But the main focus here will be Russell's,  Gothic.

​________________
Joan Hawkins, PhD, is a Professor in Cinema and Media Studies at Indiana University Bloomington. She is the author of Cutting Edge: Art Horror and the Horrific Avant-garde,  Downtown Film and TV 1975-2001, and -- with Alex Wermer-Colan -- William S. Burroughs Cutting Up the Century.  She has written extensively on horror, the neo-Gothic, and experimental cinema. She is currently working on a book on Indie Horror and editing two anthologies on 1968. She has been a lover of the Gothic since she was old enough to reach the Brontës on the library shelf.

_________________________
​Virginie Sélavy, PhD, is a film scholar, writer and editor. She is the founder of Electric Sheep Magazine and was co-director of the Miskatonic Institute of Horror Studies – London. She has edited The End: An Electric Sheep Anthology and contributed to Lost Girls: The Phantasmagorical Cinema of Jean Rollin and Sixties British Cinema Reconsidered, among various publications. She has written and lectured widely on horror, fantastique and exploitation cinema and runs an annual course on surrealism in film. She is currently working on a book on sado-masochism in 1960s-70s cinema. Her website is www.feminaridens.com​.

The cult vampire film Near Dark (1987) was Kathryn Bigelow’s solo directorial debut and remains her only foray into the horror genre. A box office failure, the film built its reputation and cult following, beginning with a screening at the Museum of Modern Art in 1988, which acknowledged Bigelow as an important new voice in filmmaking in part due to her visually arresting and dynamic directorial style. This lecture will reflect on the film’s place in 1980s vampire and horror cinema, exploring how Bigelow’s nuanced understanding of genre hybridity and a creative eye for chiaroscuro enabled her to offer a richly designed reimagining of the Gothic. It will explore how the film’s collision between light and shadow not only underpins its visual design but evokes its moral complexities, channels its reimagining of the vampire, and entices the audience into the twilight landscape of the undead. This lecture will position the film within Bigelow’s career and demonstrate how and why it remains one of her most impressive and significant works.
________________
Stacey Abbott, PhD, is Reader Film and Television Studies at the University of Roehampton, UK. She is the author of Celluloid Vampires (2007), Angel: TV Milestone (2009), Undead Apocalypse: Vampires and Zombies in the 21st Century (2016), and the BFI Film Classic on Kathryn Bigelow’s Near Dark (2020). She Is Currently Co-Editing the Routledge Companion to Horror and is developing a book on animation and horror.

The fame of Captain America as a superhero is indeed undeniable. The Captain, however, is not often associated with Gothic narratives and iconographies, and his comic-book persona generally tends to epitomize 1940s notions of sanguinity, military power, and American patriotism instead. And yet, within the folds of Captain America’s many transmedia storylines, hides the presence of a dark and haunted hero. Taking the conflicted status of the superhero as a point of departure, this lecture will explore how Captain America films from the Marvel Cinematic Universe bring to the surface latent, and often unspoken, associations with forms of Gothic storytelling, and place a particular emphasis on haunted memories, disrupted histories, temporal fragmentations, and monstrous transformations. By representing Steve Rogers as an invariably tortured figure, the films uncover underlaying re-negotiations of identity within an American society that are haunted by the shadow of conflict and destructive political machinations. The Gothic framework, based as it is on ghostly occurrences, cryptic messages and painful secrets, allows the MCU to re-articulate the traumas of America’s war-ridden past, just as it metaphorically makes sense of the present. Ultimately, this lecture aims to show how, by making a virtue of Gothic characterisation and storytelling, the re-adapted narratives of Captain America in the Marvel Cinematic Universe channel re-negotiations over the American trauma of war in the 21st century.

​________________
Lorna Piatti-Farnell, PhD, is Professor of Film and Popular Culture at Auckland University of Technology, where she is also Director of the Popular Culture Research Centre. She is author of volumes such as Consuming Gothic: Food and Horror in Film (Palgrave 2017) and The Vampire in Contemporary Popular Literature (Routledge, 2014), and editor of New Directions in 21st Century Gothic: The Gothic Compass (Routledge 2015), Gothic Afterlives: Reincarnations of Horror in Film and Popular Media (Lexington 2019), and The Superhero Multiverse: Readapting Comic Books Icons in Twenty-first-century Film and Popular Media (Lexington 2021). She is currently completing her latest monograph, entitled Poison and the Popular Imagination: Insidious Matters in Literature, Media, and Culture (Lexington), and editing a book on Disney and the Gothic, in conjunction with Jeffrey A. Weinstock. Prof. Piatti-Farnell is Editor of the Routledge Advances in Popular Culture book series.